This page contains a collection of knives that I have made over the years. They represent the knives I enjoy making (which is about all kinds) and no longer have. Some of you will recognize your knife on these pages and I want to thank you for having it.

This was my 5″ competition blade that was used to win the hunting knife cutting contest in the spring of 2001 at Washington. A handle of scorched Bois D’ Arc wood on a forged blade of 52100 that was differentially heat treated. A slight etch shows the temper line. 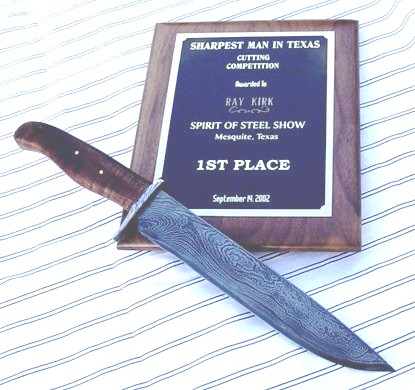 This damascus bowie was used to win the first Spirit of Steel cutting contest in September of 2002. I also used it to take the MS performance test and it broke a split second after I was told to stop. The next one passed with flying colors. Both were made of 300 plus layers of 52100 and 15N20. My favorite mix for contrast and performance.

This firestorm damascus integral was forged from a pattern taught to me by Jerome Anders and John Martin. The steel in the blade is a mixture of four high carbon steels; 52100, 1095, 4352, and 15N20. The blade is five inches long and the knife is nine and three eights inches in over all length. The butt cap of the stag is the tip of the fossil walrus ivory used on the handle of the fighter.

The skinner has a 3 3/4″ long blade that is.127″ at the ricasso. It has a tapered tang and a full distal taper on the blade. The mammoth ivory scales are attached with 3 nickel silver pins. The knife is 7 3/4″ in over all length.